The medals and awards programme is overseen on behalf of Council by the Medals and Awards Committee, which is chaired by the President. Nominations may be made at any time either on standard forms available below or by writing direct to the President.

The Rayleigh Medal is the Institute of Acoustics' premier award, awarded without regard to age to persons of undoubted renown for outstanding contributions to acoustics. The medal is named after John William Strutt, Third Baron Rayleigh (1842-1919), a very versatile physicist who conducted both experimental and theoretical research in virtually every branch of the subject. A graduate, fellow and eventually Chancellor of Cambridge University, he was a fellow and president of the Royal Society. His book The Theory of Sound remains a landmark text in the development of acoustics. The deadline for nominations for 2023 is 1st October 2022.

The Tyndall Medal is awarded biannually to a UK acoustician, preferably under the age of 40, for achievement and services in the field of acoustics. John Tyndall ( 1820-1893) preceded Rayleigh as the Professor of Natural Philosophy at the Royal Institute. He investigated the acoustic properties of the atmosphere and though a distinguished experimental physicist, he is remembered primarily as one of the world's most brilliant scientific lecturers. The deadline for nominations for 2023 is 1st October 2022.

A B Wood Medal

The A B Wood medal and attendant prize is awarded in alternate years to acousticians based in the UK/Europe (even years) and in the USA/Canada (odd years). It is aimed at younger researchers,  those who are aged under 40, whose work is associated with the sea. Following his graduation from Manchester University in 1912, Albert Beaumont Wood became one of the first two research scientists at the Admiralty to work on antisubmarine defence. He designed the first directional hydrophone and was well known for the many contributions he made to the science of underwater acoustics and for the help he gave to younger colleagues. The A B Wood Medal was instituted after Albert's death by his many friends on both sides of the Atlantic and was administered by the Institute of Physics until the formation of the Institute of Acoustics. The deadline for nominations for 2023 is  1st October 2022.

A B Wood Medal nomination form.docx

The R W B Stephens Medal was named after Dr Ray Stephens, the first President of the Institute of Acoustics. His main interests lay in physical acoustics but he is remembered by generations of students for his continuing work in education. The medal is awarded in odd-numbered years for outstanding contributions to acoustics research or education. The deadline for nominations for 2023 is  1st October 2022. 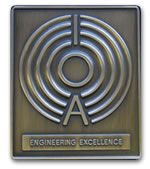 The Institute of Acoustics' Engineering Medal is awarded in even-numbered years to registered engineers at Chartered, Incorporated or Engineering Technician grade in recognition of their outstanding contribution in the field of acoustical engineering. The deadline for nominations for 2024 is  1st October 2023.

The Peter Lord Award is awarded annually for a building, project or product that showcases outstanding and innovative acoustic design. It will be presented to the team or individual responsible for the acoustic design, and will consist of a plaque to be displayed on the winning construction or project (where possible), together with a trophy and certificate for the winning team or individual. Peter Lord, a former IOA President who died in 2012, was a hugely influential figure in UK acoustics, being a driving force behind the setting up of the Institute, founder of the Applied Acoustics department at the University of Salford and first editor-in-chief of Applied Acoustics. The deadline for 2023 nominations is  1st October 2022.

The award is open to individuals, or teams, who are able to demonstrate and provide evidence of one or more of the following:
*  An exemplar contribution towards the delivery of sustainability; for today and for future generations
*Demonstration of value in all three key areas (societal, economic and environmental)
* Can clearly demonstrate a significant contribution - through education, design, construction practices or guidance - that promotes the implementation of sustainability through acoustics
Applicants are invited to highlight particularly valuable and/or pioneering aspects of their submission in key current priority areas of sustainability such as climate change, clean energy, eco-responsible materials, planning and more sustainable communities and use of soundscaping.
The Sustainability Award will be given on a rolling basis to those who reach the bar (and not an annual award), as this will enable winners of each year's cohort to have a recognised period as honoured members. The winners will get use of the bespoke logo for the year, and be featured by the IOA on the website and in the Acoustics Bulletin.

Education is possibly the most important activity of the IOA. As yet the Institute does not have an award dedicated to celebrate and recognise excellence in teaching, learning or other education activities. The IOA council approved in 2020 the proposal by Dr Luis Gomez-Agustina of London South Bank University (LSBU) to instate a dedicated education award named after late Dr Bob Peters. The aims of the proposed award are twofold: (i) To celebrate the memory of the late Dr Bob Peters who is widely remembered for his outstanding contribution to acoustics education and his long-standing commitment to teaching and student success. (ii) To recognise excellence in the design, plan, delivery, management of acoustics education, or other significant contributions to education in acoustics. The award may be for a single outstanding or significant contribution to acoustics education and training or a sustained long-term activity in this respect. The nominations deadline for 2023 is  1st October 2022.

The Award for Promoting Acoustics to the Public

The Award for Promoting Acoustics to the Public has been created to encourage activity that generates greater awareness of the importance of acoustics outside the acoustics' fraternity, that is to people without acoustical expertise. The award may recognise either a single piece of outstanding work or sustained long-term activity. The award is made every 2 years. Examples of work would include: Writing articles for the non-acoustic press; Authoring web pages; demonstrations and lectures; Work with schools to promote acoustics; media work on TV or radio; Exhibitions. The Institute would particularly welcome applications which demonstrate a pro-active engagement with the public; instances where the applicants have initiated and developed new activities, rather than simply responding to opportunities provided by others. Innovative and ground-breaking engagements are particularly welcome. Nominations can be for individuals, charitable organisations or companies. In the case of nominations for companies, it is necessary to show that the public engagement has gone above and beyond what might be expected to be the usual activities of a company. An award will only be made in any given year to a worthy recipient. Nominations may be made by third parties or by the individual concerned, in either case with documented evidence of the work involved. The award itself is an engraved glass trophy, which together with a written citation will normally be presented at an Institute conference. The deadline for nominations for 2024 is  1st October 2023.

The Award for Promoting Acoustics to the Public.docx

The Award for Distinguished Services to the Institute

The Award for Distinguished Services to the Institute was introduced so that the Institute could publicly acknowledge the debt owed to individual members who have provided sustained assistance over the years in some way with the running of the Institute. The award is a simple memento with a written citation and is preferably to be presented at a conference. There is no time scale or limit on the numbers of this award.

The Award for Distinguished Services to the Institute.docx

The IOA Young Persons Award for Innovation in Acoustical Engineering is awarded every two years. It is designed to recognise excellence and achievement in acoustical engineering among those who are aged under 35 or early on in their careers in industry. It departs from the usual format in that it is also intended to increase awareness of the value of acoustic engineering and technology to the community at large. The deadline for nominations for 2024 is  1 October 2023.

The Professor D W Robinson Prize is made jointly with the Institute of Sound and Vibration Research in memory of the late Douglas Robinson and it is presented annually to the writer of the best ISVR MSc dissertation on a topic in the human aspects of sound or audiology.