46th Annual General Meeting (AGM) of the Institute of Acoustics

The world has changed and we are all getting used to working from home.  The chats over coffee and biscuits have gone unless we provide our own.  It was into this new world that we held our 46th Annual General Meeting of the Institute via Zoom. Pre meeting concerns about how we would do show of hands voting and ensure everyone had the opportunity to raise issues proved to be groundless.  The meeting went off without a hitch and 67 members joined the meeting, which is about 3 times the normal attendance!

The meeting saw the retirements from Council of Jo Webb (Past President), Russell Richardson (Hon Secretary), Daren Wallis (Hon Treasurer), Emma Shanks and Peter Rogers (Ordinary Members).  All 5 will be missed as each has contributed enormously to the running of the Institute.

We also welcomed some new faces to Council.  We are delighted to have Alistair Somerville join as our new President Elect.  Fiona Rogerson has joined as the new Hon Secretary, whilst Reena Mathani, Yuyou Liu and Hardial Sagoo are our new Ordinary Members.  Martin Lester remains on Council but moves from being an Ordinary Member to taking over as Hon Treasurer.  A role he has previously held and yet he still agreed to do again!  Last but certainly not least, Vicky Stewart has agreed to another 2 years as an Ordinary member.

The AGM also saw Barry Gibbs handover the Presidency to Stephen Turner.  Barry remains on Council as Past President.  He will still have a busy couple of years ahead because he is also the Chair of InterNoise 2022, which the Institute is hosting in Glasgow.  Stephen meanwhile takes over in the middle of the new Covid-19 world. 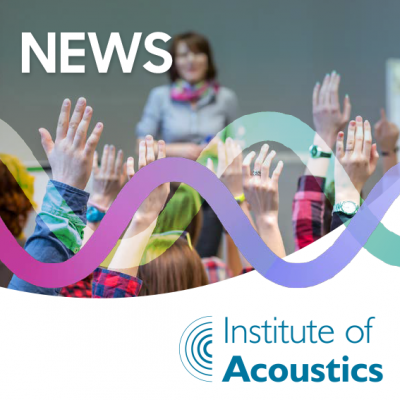