RATIONALE AND AIM FOR THE AWARD

Education is possibly the most important activity of the IOA.

As yet the Institute does not have an award dedicated to celebrate and recognise excellence in teaching, learning or other education activities.

The aims of the proposed award are twofold:
(i) To celebrate the memory of the late Dr Bob Peters who is widely remembered for his outstanding contribution to acoustics education and his long-standing commitment to teaching and student success.

(ii) To recognise excellence in the design, plan, delivery, management of acoustics education, or other significant contributions to education in acoustics.

Bob, as he used to like to be called, was a Chartered Engineer, held a BSc (Hons) in physics and MSc in Acoustics and vibration physics, and a Certificate and Diploma in education. He completed his PhD in underwater acoustics at Imperial College (London) in 1969. After three years working in the industry he started his career in education in 1972 as a lecturer of science and acoustics at Twickenham College of Technology. Since those early years, Bob remained passionately committed to acoustic education until his passing in June 2019.

He was instrumental in the creation and development of the IOA Diploma in Acoustics and Noise control Diploma when first stated in 1975.

In that year he joined North East Surrey College of Technology (NESCOT) where he remained for 22 years. During that time he led the IOA Diploma and helped developing and piloting new modules, some of which still are taught. He also developed and ran short courses in acoustics and noise control as well a successful MSc in Applied Acoustics. He became Head of School of Environmental Engineering until 1997 when he left full time roles in academia to start a double pronged career in acoustic consultancy and in education until his very last days.

While working as a successful consultant he was also a dedicated and highly praised part time educator. He taught and significantly contributed for over 25 years in the successful running of the IOA Diploma and MSc Environmental and Architectural at London South Bank University (LSBU). During this time he led the creation of the Diploma distance learning mode and wrote the course materials for several modules and acted as senior distance learning tutor. In 2000 he became he became the first Diploma Project Examiner. He also acted as an examiner for several PhD students including the author of this article.

In addition to his involvement with the Diploma delivery and development, Bob worked tirelessly in many other ways for the IOA, contributing enormously to the life of the Institute for over 40 years. He became a member in 1977, a Fellow in 1980 and was elected as an Honorary Fellow in 2008. He served as Vice-President for Group and Branches from 1992 to 1998 and received an IOA Distinguished Services Award in 2008. In 2013 he was awarded the R. W. B. Stephens Medal in recognition of his extensive and outstanding work in acoustics education.

Bob’s most long lasting roles within the IOA were as a member of both the Education and London Branch committees. Bob was on the Education Committee almost continuously.

Bob wrote four books in acoustics. The third edition of his very successful Acoustics and Noise Control book was published in 2011. Over the years this book has established itself a well known reference text for students of acoustics and practitioners. Bob latest legacy was the editing of his last book entitled Uncertainty in Acoustics which was published in 2020 soon after his death.

He is fondly remembered by his numerous colleagues and students as a highly effective and inspiring educator as well as a generous, approachable and affable person.

Through his extensive and prolific career, Bob’s teaching, influence and legacy in acoustic education has been outstanding and merits a lasting a recognition which surely will inspire other educator to excel.

The eligibility of the award is confined to individuals or teams responsible for acoustics education in the UK or with a strong UK link e.g. tutoring the IOA Diploma in the Middle East, India, Republic of Ireland, etc.

The award is biennial.

The award may be for a single outstanding or significant contribution to acoustics education and training or a sustained long-term activity in this respect.

Specific areas for consideration can include:

Nominations may be made by third parties or by the individual(s) concerned.

Documented evidence will be required to be submitted to demonstrate merits related to the aims and criteria of the award.These can include:

The award may only be made in any given year if a worthy recipient is identified.

The physical award will consist of the presentation of a trophy or a plaque at an event with an educational benefit such as the invitation to attend/present to an IOA conference with waived fees.  Wider recognition could be a featured mention in all IOA communication channels. 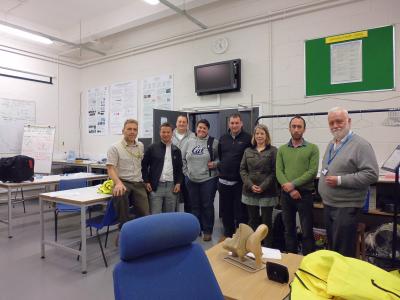