In the International Year of Sound, the Institute of Acoustics recently brought up the importance of acoustics in Parliament on 24th February 2020 in a wide ranging debate held by the Parliamentary & Scientific Committee, the oldest such committee formed in 1939.

This led to excellent discussion with requests from the committee for follow up information.

There were three speakers from the Institute giving 15 minute presentations each to members, which included members of both houses. Biographies of speakers and the program can be seen below. Peter Rogers of Sustainable Acoustics was closely involved as IOA representative on the P&SC.

Stephen Turner, MA, MSc HonFIOA; President-Elect, Institute of Acoustics Stephen provided an overview of the profession of acoustics and discussed some of the current policy challenges relating to effective management of noise. Stephen has worked in the field of acoustics, noise and vibration for over 42 years in both the public and private sector. For 15 years he was a technical advisor to the noise policy officials at Defra and its predecessors, including four years as a Civil Servant until 2015. In that time, he was closely involved in developing noise management policy, working across Whitehall and the Devolved Administrations. He is a member of the European Commission’s Noise Expert Group and chairs the British Standards Institute’s committee on transportation noise.

Dr Benjamin Fenech, PhD, MSc, BEng, MIOA Group Leader, Noise and Public Health, Public Health England Benjamin discussed the adverse effects that arise from exposure to noise covering both what we know and what we don’t know. He also presented the latest data regarding the current extent of the noise impact in this country, including its effects and its social cost to society. Benjamin has over 16 years’ experience in the field of acoustics, split between academia, private sector and most recently in the public sector. As a civil servant he provides advice on the health effects of noise to a broad range of stakeholders, including various Government departments, NHS England, NICE and the World Health Organization. He sits on two British Standards technical committees; and is a UK Expert on an International Standards Committee. Benjamin is an elected member of the Institute of Acoustics Council.

Professor Chris Barlow, PhD MSc BMus SFHEA MIOA MAES Professor of Acoustics, Solent University Chris discussed the current issues regarding attracting young people into the acoustics profession so that the needs of both the industry and society can be met in the future. Chris was responsible for setting up Acoustics as a new discipline at Solent University. He is an active researcher, focusing on the human response to noise, including the effects of leisure activities on hearing loss, and the acoustic design for restorative spaces (in both the real and virtual worlds). He is also a Director of Positive Acoustics Ltd., an independent consultancy offering design and advisory services on acoustics and noise control. Professor Barlow is a member of the Institute of Acoustics’ Council and chair of its Education and Learning Working group. Chris is also a member of the UK executive committee of the Audio Engineering Society.

Attached presentations are accessible for downloading below.

Here is an overview video that was developed by the IOA specifically for this important debate:

P&SC video by the IOA (duration 3 minutes) from education 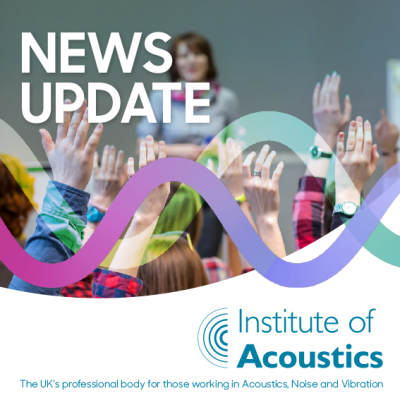