On 23 February 2021, news organisations ran headlines such as ‘NASA’s Mars Perseverance rover beams back first sounds ever recorded on another planet’.

We know in detail what many of the landscapes on planets in our solar system look like, but decent quality data on how they sound is rare.  This not only means that movies generate unrealistic soundscapes for, say, Mars, but we miss the opportunity to infer what is happening in an alien world using complementary signals.  Acoustic signals can travel around line-of-sight obstacles that block, for example, the view of a camera.  Taken on 5 March 2021, this colour-calibrated image from a Navigation Camera aboard NASA’s Mars 2020 Perseverance rover shows tracks from the rover’s first drive (darker marks in the foreground) and an area scoured by the Mars 2020 mission’s descent stage rockets (lighter-coloured area in the middle ground).

They can travel through liquids and solids that are optically opaque. The bandwidth and power requirements, and weight and fragility of acoustic sensors can often be less than those of video cameras. The previously slow progress in capturing an alien soundscape2 took a very significant step forward with the successful deployment of NASA’s Mars Perseverance… 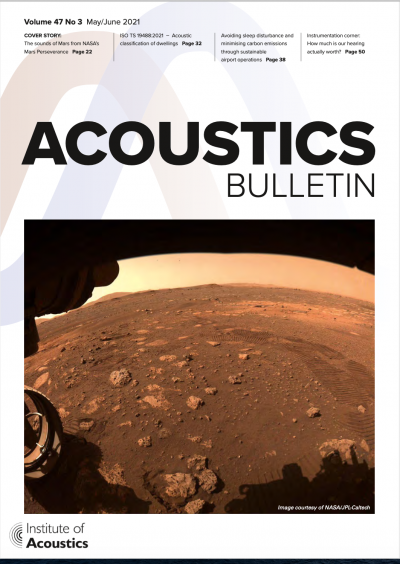