It’s non-binary people’s day. And if you didn’t know that it existed OR that it was needed, that’s exactly WHY we need Non-Binary People’s Day. “Non-Binary” can be an individual identity, but is being used here as a high-level, catch-all term covering all people who are outside of binary gender in any way, including but not limited to:

There are more descriptions than this, those listed here are in no particular order, and none of them have been excluded for any reason other than conciseness. As a non-binary person this is an important topic for me personally, so let’s talk non-binary issues in the simplest and least political terms I can think of.

“Are you a cats or a dogs person?”

“I’m a reptiles person actually. I’ve got three bearded dragons and a corn snake but I really want to get a tarantula too.”

“Neither? I prefer reptiles and insects.”

“That’s not an answer. It’s an easy question, are you a cats or a dogs person?”

“Well, I’m allergic to cats and I was bitten by a dog as a child so neither. Aren’t reptiles good enough?”

This is a conversation that starts off and conforms to expectations but very quickly turns to absurdity. What about Gordon’s Gin and Schweppes Tonic? It would be lunacy to declare that only this combination could create a “Gin and Tonic”. What if you prefer Sinner’s Gin, or Fever Tree tonic? It would still be a gin and tonic, so why do we let gender labels get in the way of our perception of people as “human”?

Whether you drive a Saab, SEAT, Skoda, Subaru or Suzuki, you would still say that you drive a car, for example. You wouldn’t insist it’s not a car because it’s a quadricycle really. Why then, in the UK at least, do non-binary people not exist? I know that sounds ridiculous, but in response to a petition to update the Gender Recognition Act 2004 which received over 35,000 signatures, the UK Ministry of Justice stated in 2015 that:

“Non-binary gender is not recognised in UK law.”1

“…individuals are considered by the state to be of the gender that is registered on their birth certificate, either male or female.”1

They then went on to state that:

“The Equality Act 2010 protects people from discrimination if it arises from their being perceived as either male or female. We recognise that a very small number of people consider themselves to be of neither gender. We are not aware that that results in any specific detriment…”1

Now you’d be forgiven for missing it, but let us do a little bit of dissection on that response. According to the Ministry of Justice, everyone is either male or female – there’s no intersex, there’s no non-binary or fluid gender recognition, you’re either male or female. The Equality Act 2010 will protect you from discrimination if you’re perceived as being ‘male’ or ‘female’, whatever that means, but won’t protect you if you’re perceived as ‘other’.

‘Man’ in a skirt? They’re not protected from slurs relating to gender identity. What about a ‘woman’ with short / shaved hair and wearing a suit and bowtie? Nope, no protection. You don’t necessarily fit into the binary, so the government will decide where you fit because you don’t exist otherwise – the response suggests that even intersex people must be considered either male or female, regardless of age, upbringing, gender expression or genetic make-up.

“We are not aware that that results in any specific detriment”1.

You may not exist, but that does not legally cause any specific detriment. Apparently. At the time of writing this, the UK population is 68,600,126 people, approximately 0.4% of the UK population chooses “other” when asked if their gender identity is “Male, Female or Other”. A conservative estimate then, is that 250,000 people in the UK identify as non-binary. 250,000 people who legally cannot exist because they aren’t male or female.

Yet we all know that these people DO exist. They might be our family, our friends, our work colleagues, the person you see on the bus / train every morning. By any definition that you care to find, I exist. If you exist, then there is no philosophy in which I don’t also exist. Except that in the eyes of UK law, I don’t.

Non-binary rights have come a very long way since the Stonewall Riots 50 years ago, we are able to have this conversation without fear of arrest or violence after all. However, there is still a very long way to go when a country with a “good” human rights record declares the legal non-existence of a large minority of the population.

For example, there was very limited national coverage of the Trans Pride event in London on 9th July 2022 despite over 20,000 people taking to the streets of Britain’s capital city to protest the lack of support for trans people. Roads were closed across the capital as the crowds marched to try and raise awareness, particularly following the ban on conversion therapy in the UK.

However, Conversion Therapy for trans, intersex and non-binary peoples was explicitly excluded in a recent UK ban on conversion therapy. For those unaware, conversion therapy is meant to “cure people” of their sexuality and / or gender “delusions” to make people heterosexual and cisgender.

You can no more cure someone of their gender or sexuality than you can cure someone of their nationality or age. Conversion therapy may include, but is not limited to relatively minor interventions like counselling, social skills training or spiritual interventions, but can include much more arcane methods which it would be inappropriate to discuss here. Suffice to say, however, that some experts have described conversion therapy methods as contrary to human rights.

As of 2022, it is estimated that the USA will spend $650 million on youth conversion therapy, and a further $8.5 billion in associated costs such as suicide and substance abuse linked to conversion therapy. In the UK, it is not unreasonable to assume the costs would be dissimilar on an individual basis at least (smaller population = less overall cost).

As of April 2022, according to the YouGov plc analytics and research group, approximately 60 % are against it for gender identity also (62 % England, 57 % Wales, 61 % Scotland). While these are strong numbers, this still leaves slightly more than one in three people unsure whether non-binary people need conversion therapy or not, and approximately 15 % support conversion therapy.

As a non-binary person, I find it quite distressing that as of April 2022, an average of at least one person in 10 thinks I should be subject to medical or therapeutic intervention of some kind to alter my gender identity.

In some ways, I am blessed. I recognise that being white and British I have privilege. I have genetic gifts such that I am tall, broad shouldered, and have a big beard. I cut a very masculine image in many ways so am often perceived as, and am assumed to be a cisgender male so am afforded the associated privileges. I’m very grateful that I don’t get many comments, I don’t often stand out from the binary gender identity. This all means that when I speak, people tend to listen because it is culturally acceptable to listen to and agree with the cis-gender male that I appear to be.

Newsflash! I am not a cis-gender anything. Despite appearances, I am non-binary. I’m listened to because it’s assumed I’m something I’m not – I’m hoping that by using my privilege to speak, I will be able to raise awareness for all those who are non-binary and may need some support.

I want to stop the denigration of non-binary peoples. If I use they / them pronouns, it doesn’t hurt anybody for me to do so. If nothing else comes of this effort, if someone uses Zie / Zim, or Ey / Em, Tey / Ter or any other pronouns I would like more people to respect that and use those pronouns and if in doubt, use that person’s name, don’t assume binary gender.

Having said all of this, I’m going to go for a swim. Please don’t judge me for what I wear, just enjoy the sun and have a good time. That’s what we all want at the end of the day anyway – peace, love and happiness.

I’m not a professional therapist or counsellor in any kind of way, but if you would ever like to talk, ask questions or discuss anything mentioned here, please feel free to reach out to me confidentially and I’ll be happy to talk to you.

1 Ministry of Justice response on 11 September 2015 to petition to “Allow transgender people to self-define their legal gender”     https://petition.parliament.uk/archived/petitions/104639 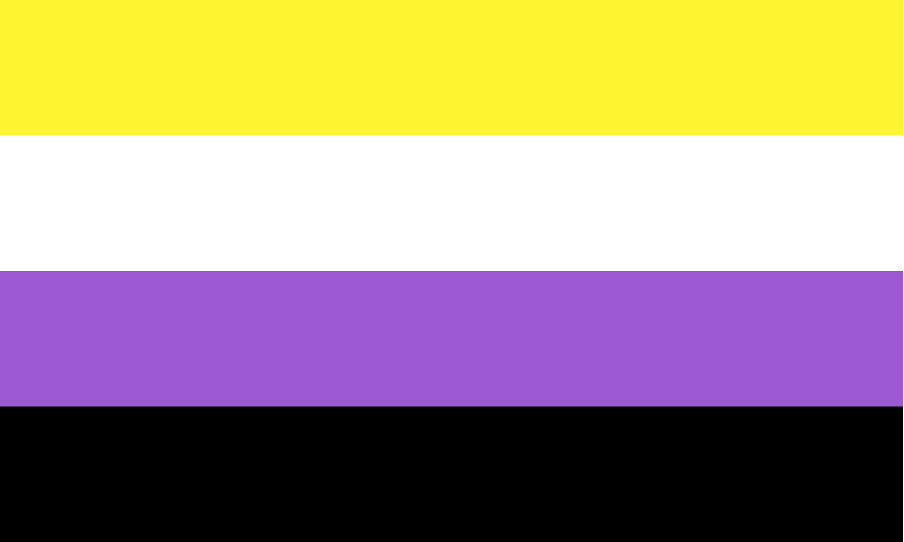