Alex, who works for an acoustics consultancy, is a project acoustician who specialises in building and environmental acoustics, acoustic design of building services, noise and vibration control, sound insulation design and testing and public address/speech intelligibility. Whilst not initially starting out as an acoustician, Alex first gained his BEng degree in Aerospace Engineering at the University of Manchester, where he developed a passion for electro-acoustics and music production, this later encouraged him to complete his MSc in Environmental and Architectural Acoustics at London South Bank University following a return to his native London. So what does he enjoy most? “Seeing the benefits that good building acoustic design brings to people's lives is the most rewarding aspect of the job,” he says. 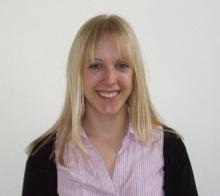 Angela first became interested in sound through physics at school and work as a sound engineer. She studied Audio and Music Technology at Anglia Ruskin University and completed the IOA Diploma, which she thinks is a great course as an introduction into the different aspects of acoustics. In order to understand the physics of acoustics more thoroughly, Angela is studying for an MSc in Sound and Vibration at ISVR. Angela started her career as a Noise Control Engineer and she is now an Acoustic Engineer for a multi-disciplinary consultancy which allows her to discover how acoustics fits into the wider picture in terms of the environment and human responses to developments. Her day-to-day role includes noise surveying, noise modelling, undertaking noise assessments and ES Chapters using local and national policy and guidance and creating noise control solutions where necessary.

“ I enjoy working in acoustics most of all because it’s something tangible that you can perceive wherever you are and it’s something that everyone has an opinion of, which means you can genuinely help the people you’re working on behalf of. Just ask someone living in house with underperforming sound insulation, or someone near to a proposed distribution centre, for example,” she says

Adam is a consultant at Acoustic Dimensions in Coventry and works in the fields of building, architectural and environmental acoustics. He is responsible for the acquisition and delivery of building acoustics projects and smaller scale environmental acoustics work. Adam’s main tasks include the preparation of project proposals, attendance at meetings with potential and existing clients, and the completion of surveys, assessments and reports. His career began with an early affinity with music which led him to study music technology at school. He then went on to study BSc Acoustics at the University of Salford. After graduating he joined Faber Maunsell as a graduate acoustic engineer in Manchester before returning to his childhood home of Coventry to take up a job at Acoustic Dimensions.

“I studied physics with acoustic at the University of Salford. I then worked for NXT developing new loudspeaker technologies based around distributed modes within structures and in particular I worked developing a unique resonant actuator called a DMA (distributed mode actuator). This technology was targeted at mobile phone applications. After leaving NXT I moved to KEF and worked developing a number of different hi-fi speakers. During my time at KEF I spent my time not only developing products but also being a project manager. My latest position is with Bowers & Wilkins as a Technical Product Manager. Within this role I am responsible for the technical definition of new products, the development of the product to time and cost constraints and also supporting the product in the market. “