The 23rd June 2022 is International Women in Engineering Day (https://www.inwed.org.uk/)

To help celebrate this day, the IOA has put together a number of profiles of some of the brilliant women currently working in acoustics.

The IOA will also be publishing profiles of women in acoustics in upcoming issues of the Bulletin over the coming months.  These will be made available on the IOA website.

One of the things I’ve been proudest of in my career is of being elected as the first woman President of the IOA.  That was a far cry from my earliest days on the IOA Council in the 1980s when there was a very hostile reception to my suggestion that, in rewriting the Code of Conduct for members, it might be an idea to replace the only pronoun used throughout, ‘he’, by ‘he or she’ or something similar!

When I started working in Acoustics in the early 1970s, doing a PhD on factory noise at the University of Birmingham, there were very few women working in the field. At conferences and meetings I would often be the only woman present. When I became pregnant with my first child I asked if I could have maternity leave, the legislation relating to maternity leave having recently come into force.  No one at the university knew what to do as I was the first person to ask!  Eventually it was granted and I took the 3 months maximum leave allowed.

Over that period I have seen huge changes in the acoustics profession in general, and in the IOA in particular.  There has been a slow but steady increase in the number of women members of the IOA, and young women now make up a large percentage of delegates at conferences.  I get a real sense of pleasure when I now sometimes have to queue for the ladies’ loo at a meeting!   Women members today tend to be very active in the Institute, taking leading roles on committees and in various IOA initiatives.

Looking back I think that, although women of my generation experienced significant amounts of sex discrimination at work, which often made things difficult and/or unpleasant, in many ways things were easier for us than they are for women today.  It wasn’t too difficult for me to return to work as I could make use of free nursery places, and relatively cheap child minders and au pairs.   (I do however now feel guilty about exploiting the cheap labour provided by other women so that I could enjoy a fulfilling career. )  I also had the luxury, as an academic, of some flexibility with my time. I see young people nowadays, both men and women, especially those with young families or other caring responsibilities, having much more difficulty balancing work and home life. Today’s expectations for instant responses and the pressure to get things done quickly, often at very short notice, make part time working in particular more difficult.   This is, I think, reflected in the current low numbers of middle aged women active in the Institute and at conferences, suggesting that women (and men) who take a career break for family reasons might find it difficult to return.

I believe there are things the IOA could do to support its members by raising awareness among employers of some of the issues faced by younger members and providing routes (for example, refresher courses, mentoring) for those wishing to return to the profession after a career break

Thus, while it has been a huge pleasure to me to see the changes in the profession and in the Institute over the past decades with increasing numbers of women acousticians, i look forward to the day when it will be quite usual to have a woman President, several women on Executive and many more women on Council.

Dr Hasina Begum has recently completed her PhD from the University of Sheffield looking at acoustic insulation of pipes using wonder materials called aerogels. She now works as a Project Engineer looking at the flow monitoring and system maintenance of wastewater in pipes using dual-purpose fiber optic sensing technology. Throughout her academic career she has been actively involved in public engagement across the UK, encouraging young people, particularly women of minority groups to pursue with careers in STEM. Dr Begum loves to empower and inspire the next generation of Scientists. She believes significant change begins at the grass roots and through creating platforms for open discussions in smaller, less-progressive communities. She aspires to be a role model and a voice for the underrepresented, breaking barriers and succeeding as a Muslim woman in Engineering. “Growing up, there were never any women in Engineering that looked like me. I want to change that, so that hopefully, young girls can look at me and say I want to be just like her, or better yet, even better than her!”

Having a bachelor’s degree in Mechanical Engineering, and currently working towards my PhD in Acoustics at the University of Salford, I got a chance to work as a Knowledge Transfer Partnership Associate with different universities in active collaboration with industry partners to drive Acoustic Product Development and Materials Engineering.

With over four years of experience in Research and Business Development under my belt, I have recently joined Hoare Lea, London as an Acoustics Engineer. Here, I am having an opportunity to explore and contribute to a variety of projects, ranging from being at film studios, at music venues, in the middle of fields, atop majestic buildings, at world class universities, and my all-time favourite - being at the football stadium watching over a match from the best of seats (a perfect mix of business with pleasure)!

Acoustics, to me, is a field where art meets science. One can very well appreciate how the best of both the worlds of Music and Physics blend perfectly to connect with one of our five senses.

As an acoustician, I work on a variety of aspects associated to communicating how our sonic ambience is affecting us. On some days, I may be measuring sound from local surroundings of a site, while on others I am post processing the acquired data and computationally modelling these spaces I have visited, to obtain meaningful information. I get to attend plenty of discussions with clients, architects, and fellow acousticians to help develop my understanding in the field. I also get to attend conferences, workshops, and training sessions to enhance my knowledge and keep up with the latest trends in the industry.
What I absolutely love about being an acoustic engineer is the ability to take important decisions and steer projects to a successful stage on an everyday basis. This brings me immense joy as it places me in a position of power and what they say is true, with power comes responsibility!
I often try to relate how Isaac Asimov puts it, “Science can amuse and fascinate us all, but it is engineering that changes the world.” As an engineer, I have always had the urge to create and contribute to society, shaping it to be fit for future. In my present position, I feel passionate about taking up new challenges that help reduce the nuisance caused by noise so that we can all enjoy the goodness of sound, retain the music of nature, and let society live life in peace and harmony.

My fundamental approach to life, gathered through my journey, is to believe in oneself, follow own ears (instincts) and keep one’s interests alive. There is a huge difference between ‘Success’ and ‘Satisfaction’, both bearing different end results. So, one needs to choose and tread on the path that resonates the best with oneself.

At school, I’ve always enjoyed physics but was not inspired by the idea of traditional mechanical engineering degree. Whilst researching my options, I stumbled on an acoustical engineering course, which intrigued me. Before I knew it, I had applied and graduated from the University of Southampton with an MEng and have been working within the building acoustics team of Hoare Lea in London ever since.

During this time, I’ve worked on numerous projects, primarily within the residential, office and education sectors; both new-build and refurbishment. I’ve enjoyed working within the construction industry, learning how things are built, and contributing to how people will experience these future spaces. I’ve gained an appreciation for the extent of commitment and collaboration required from all engineers to design & build a good and functional space.

My time at Hoare Lea, a multi-disciplinary consultancy firm, has allowed me to learn from and appreciate my fellow engineers. Working with colleagues from different disciplines has also enabled me to provide a more cohesive solution to any engineering problem at hand.

Unlike some of the other consultants within the industry, as specialist engineers, we have the opportunity to work on various projects in a very short amount of time. This is an aspect I enjoy as it allows me to develop different skills and keeps day-to-day life interesting.

I always had high grades in most subjects at school. Not because I was very bright, but because I wanted to be a good girl and tried working hard. As a teenager I enjoyed reading popular science books, especially the ones about particle physics and the origins of the universe. These were the topics which fascinated many kids in the 80s, so I decided to become a physicist! I took entrance examinations to one of the top technical universities in the USSR which meant moving to Moscow from a provincial city where I lived. I did not get very high marks at those examinations, but they were sufficient to get a place although without a scholarship in the first semester. At the beginning, I was very happy to be a student of the department of General and Applied Physics which was considered the most prestigious. But by the end of my second year I realised, that I am more attracted to an applied than pure science. I made a brave move and transferred to a department of Laser Physics. I did my MSc project in General Physics Institute of Russian Academy of Sciences and then got a PhD scholarship to continue my studies there. The topic was nonlinear effects in interaction of ultrasound with fluids. I did not specifically choose acoustics, laser physics was no less interesting. But only in acoustics a scholarship was available, so I decided to go for it.  I suppose it was a struck of luck – 90s were still a golden era of nonlinear acoustics in Russia. I had a great supervisor Prof Lyakhov who knew very well how to inspire his students.

It took me longer than usual to get a PhD. The first and the main reason is that I work slowly. The second reason is that I had my son during my MSc studies and babies do require attention. And finally, it was the time of post-soviet collapse of the political system - finding assessors for a PhD jury was not easy.
After that my career was straightforward. I moved to UK in 1998 to do a post doc with Prof Keith Attenborough. Again, I was lucky to have an exceptional supervisor who I learned so much from. In 2004 I joined Acoustics Research Centre at the University of Salford where I work since then.

To me acoustics seems to be a subject that has everything in it. I enjoy doing applied research and work with the companies. At the same time, I am glad I had an exposure to pure science earlier in life. This helps to understand acoustics as one of the branches of physics and see its relationship with the others.

Some of our previous blogs on women working in acoustics

Angela Lamacraft - how I discovered my acoustics career 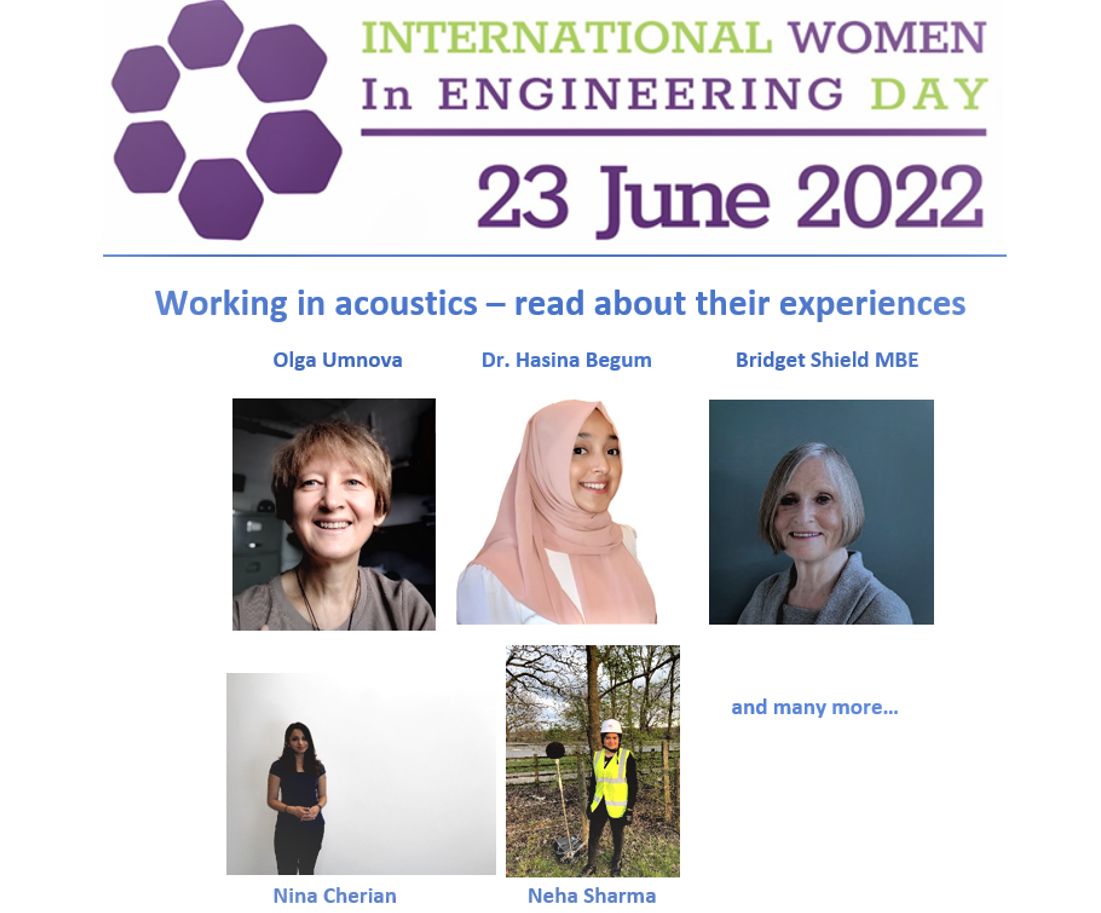